We’ve been doing all we can to plan for three smaller gatherings in Peterborough this Summer – United Elements 1 and 2 and Sixty One, which each include Luminosity for youth.

We are sad to have reached the difficult decision that we can no longer go ahead. Here’s our National Leader, Paul Harcourt, with an update:

If you have booked for United Elements or Sixty One, thank you for your faithfulness. As promised, there was no financial risk to you. We have emailed you about refunds/transfers. See our latest blog and FAQs for further info.

We announced last year that we’d be running a digital event this summer, so we’re well ahead with our plans for United Breaks Out (UBO) – from Thursday 29 July until Tuesday 3 August 2021. Confirmed speakers include Francis Chan, Julian & Katia Adams, Amy Orr Ewing & Jordan Seng.

Further information and tickets will be available from mid-April, when we’ll also announce exciting plans for ‘UBO Local’ – broadcasting via New Wine churches around the country!

‘United Breaks Out has been such a blessing. I have watched many sessions again and again. They’ve been hugely healing. The prayers at the end and silent time to allow the Holy Spirit to heal old wounds has been wonderful’

‘A picture from God was shared one evening and I felt Jesus was speaking directly to me. It was on the work of transformation he is doing in me. The whole weekend was such an encouragement and the Holy Spirit ministered to me powerfully’

‘My daughter is 7 and we’ve been to United most years since she was born. In the first UBO kids session, on a tiny iPad screen on the sofa in our living room, she said she wanted to follow Jesus for the first time’ 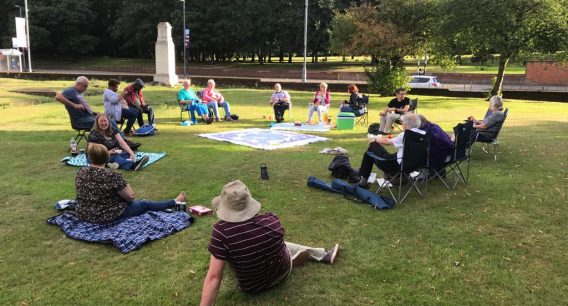